Fast-tracking the development of young rugby players in the four “esses” – size, strength, speed and skill

A two-year program of accelerating the physical and skill development of young players at Sydney University has returned big dividends.

Within days of losing the 2006 First Colts Grand Final due to being out-muscled at the breakdown, University coach Nick Ryan met with his team and together they made a pact to never again be pushed off the ball. The players allowed themselves a mere three weeks break before getting back into training for the 2007 season at a level of intensity not seen before in Sydney club rugby. The off-season training regimen consisted of 4 weights sessions and 3 field sessions per week, switching to 3 weights and 2 to 3 field sessions during the playing season plus regular individual video analysis and field sessions with the coach.

The central ingredient of the training has been the strength and conditioning components devised by Martin Harland and administered by him and his assistant, Tim Leahy. “I guess we have two training tenets” Harland explains, “that is to always train hard and to train hard in the right areas. Thus developing the culture of no short cuts and to attend to the things in a prioritized plan from what we lack the most or what will help us the most on the park.” Harland’s programs for rugby players place a high degree of emphasis on basic strength development, increased bodyweight and speed. At the same time, given the year-round training commitment, great care is taken to guard against player burnout.
“We are consistently monitoring signs of overtraining,” says Leahy. “Our in-season training structure does differ from our pre-season regime. The two key factors that help us guard against overtraining and player burnout is to firstly ensure our players are educated and understand the importance of post-game recovery strategies.
“Secondly a close working relationship with coaching staff to ensure on field and gym volumes are of an optimal load. All variables as well as player’s subjective observation of energy, fatigue levels and contra indicators to injury are taken into account when prescribing volumes.”
With a strong strength and fitness foundation laid, Nick Ryan and his team coaches are free to focus on technical proficiency and team cohesion. “The aim of our training sessions,” says Ryan “is to up-skill and empower the players, so that when they take the field not only can they read the game and make the right decisions, but then execute and finish off the activity with the help of team mates who are on a similar skill level and wave length.” The payoff in terms of enhanced performance from the integration of strength and rugby coaching has been dramatic.
In the 2007 season University First Colts lost just one game out of 25 in winning both Minor and Major Premierships. Seconds and Under-19 Colts also won both Minor and Major awards. The dramatic improvement in the physical development of players can be seen from the Table below. As compared with the 2006 First Colts team, the 2007 forward pack’s average bodyweight increased 5kg to 104.3kg; the backs 5.8kg to 86.2kg; and the team as a whole 5.3kg to 95.8kg. 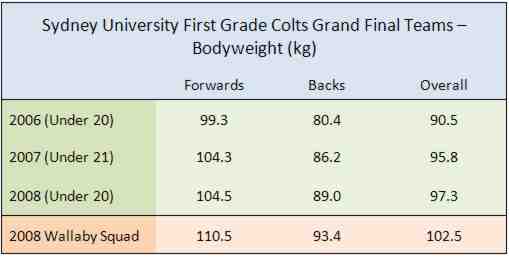 The second year of intensive training produced even more impressive results. In the 2008 season all three Colts grades won both Minor and Major Premierships, with First Colts remaining undefeated throughout their 24-game season. Despite the age limit for Colts having dropped from Under-21 to Under-20, players’ bodyweights again increased by 0.2kg for the forwards; 2.8kg for the backs; and 1.5kg overall.
“physical domination … has enabled us to build a very strong defensive wall and to implement a highly structured game plan which we can maintain for the full 80 minutes.”
To put the 2008 figures in perspective the Table also shows the bodyweights of the best professional rugby players in Australia, the current Wallabies squad. They outweigh this club-level Under-20 team by just 6kg per man in the forwards and 4.4kg in the backs. And this team of university students is currently on an unbroken 34-game winning streak! It is almost time for the administrators of Australian rugby to recognise and to take seriously the great experiment that is going on in their own backyard. 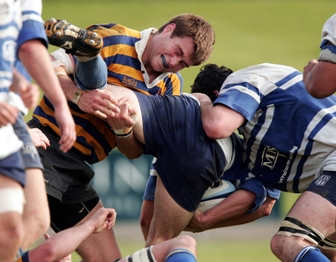 Colts coach Nick Ryan has the extraordinary record of taking his team to the Grand Final in each of the 7 years he has coached; with his only loss the 4 point defeat in 2006. He says, ” A very important outcome from the intensive training regime of the past 2 years has been our ability to achieve physical domination in matches. This has enabled us to build a very strong defensive wall and to implement a highly structured game plan which we can maintain for the full 80 minutes.” As with the weight training, Ryan ensures that the field sessions are short and frequently varied, with the emphasis on having his team peak on Grand Final day in September. He certainly achieved this in 2008 with the winning scoreline 39-5.
In the regular season in 2008 Ryan’s team averaged a 40-point winning margin and conceded only 8 points per game. Seconds and Thirds Colts also conceded just 8 and 5 points respectively per game.
A distinctive feature of the Sydney University rugby program has been its reliance on the MyoQuip range of strength building equipment. For the past four years the University gymnasium has been the primary development site for these machines. Not surprisingly MyoQuip’s ScrumTruk and Hipnee Thrust* have been extensively used for lower body strength development. Martin Harland says, “These two lower limb extensor machines have been integral to training a wide cross-section of athletes in different sports at the University. In rugby they enable us to reduce the deleterious effects of heavy lower leg extensor exercises and on-field running loads. Traditional heavy squats & deadlifts are great for strength and size but are only moderately compatible with higher running loads for field or court sports. and incompatible with a sizeable subset of your player population for various reasons. To be able to de-load players spines while building hip & knee extensor strength through range of motion means more athletes able to train intensely in the gym and front up for intense speed & fitness work in the same week.”

The combination of an intensive, well-structured and coordinated training regimen and the use of strength apparatus with high specificity for rugby can be seen to have produced accelerated physical development which has enabled players to perform at a consistently high standard.
*In recent months the University gymnasium has replaced its ScrumTruk and HipneeThrust machines with the more advanced and compact MyoTruk and MyoThrusta models.
For up-to-the-minute information about Myoquip and discussion of strength-related issues visit MyoQuip Blog – strength equipment, rugby football