Unlike the majority of articles on this site, the following review looks at how to plan and periodise strength & conditioning over a 9 month period. Here in England (UK) the competitive period will begin on the first weekend in September and could potentially run all the way through to the last weekend in May. This period could also consist of the team competing in 3 major competitions; the Guinness Premiership, the Heineken Cup and the EDF Cup.

Planning and delivering strength & conditioning support to the athletes involved in this type of setting is challenging to the say least. To give a more in depth view I will attempt to describe the types of systems and preparation we (Bristol Rugby Club) used in the season just gone.

During the previous season we finished 9th in the Guinness Premiership, this was perhaps disappointing for us as we had reached 3rd position and the play-offs the following year. However, as we all know in sport it only takes a few missed opportunities to find yourself lower down the ladder.
The players reported for pre-season training in mid-June and worked in 3 week cycles with 1 week off after each cycle. The cycles concentrated on all of the usual facets associated with athletic improvement, including, strength, speed, power, flexibility and endurance. We as a strength & conditioning department were lucky in that we had roughly 5 weeks dedicated to just physical preparation. As the season drew closer we had a short tour o France including a game against Biarritz and as such rugby training increased and the overall volume of training were reduced. This was also the first season in 5 years that the club was back in the Heineken Cup (a competition including the best English, French, Irish, Welsh, and Scottish and Italian teams). Participating in this tournament places a huge strain on the playing and management staff as you could find yourself preparing to play Stade Francais one week in the Heinken Cup and then straight back to the League the week after.

As a result the games come thick and fast and keeping players fresh, fit and healthy is of paramount importance. Also a fair few of our 1st team squad are older players and as such have to be managed accordingly, and it is critical to know when to push and when to back off-developing relationships with these players is important as they will know their bodies better than I do.

So to revert to the original title of how to plan and periodise for this type of season there are several areas that need to be examined first.

Each week during the season there will be 2 games; 1 first team game which could be in one of the aforementioned competitions and then on a Monday night there will be a united game (academy/2nd team). Consequently when planning the cycles this must be taken into consideration. The majority of our squad followed the monthly cycles listed below. 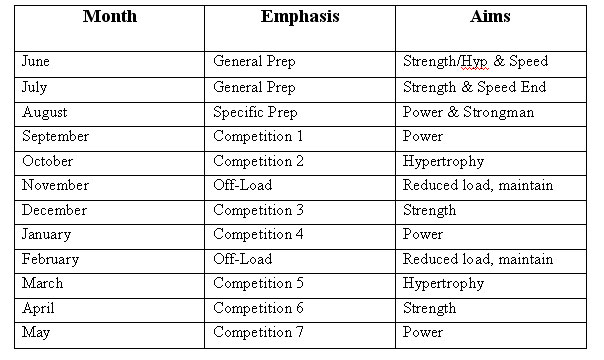 It is important to note that not all the players followed the above schedule and that this table is purely the strength training plan. With regards to speed and endurance this is not periodised in the classical sense of the word. Each week is planned in advance, however, obviously if we have a hard game then the week is amended, likewise if the game wasn’t that hard then we may have a speed session in the week. Speed and endurance are still trained but from an individual and on a weekly basis.
The main aims once the season starts is to give the coach as many physically and mentally fresh players each week for selection. As long as this is happening then we are fulfilling our roles. Obviously this article only covers the tip of the iceberg, but hopefully it will provide some debate and insight into working in the northern hemisphere.

Stay tuned for more stories from the north!
Tom. 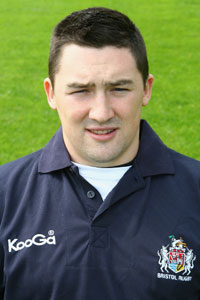 Tom McLaughlin – Assistant Strength & Conditioning Coach
Tom is employed alongside Dave Bell in the Strength and Conditioning Department with responsibility for the senior and academy squads. This is Tom’s 4th year employed by the club after starting work on a student placement.
His duties involve assisting within the strength and conditioning department ensuring all of our players are well equipped to deal with the physical demands of Guinness Premiership rugby.
Tom has completed a BSc (Hons) in Sport & Exercise Science from UWIC and is also certified by the National Strength and Conditioning Association (NSCA). Recently Tom also completed Level 2 of the Charles Poliquin strength programme.