I was recently in Tokyo and was able to spend time with a colleague and friend Andrew Jackson, formerly of Christchurch, but now Head strength and conditioning coach of Ricoh rugby club, based in Setagaya, Tokyo. Ricoh is one of the 14 teams that make up the Top League competition within the Japan Rugby Union.

I am very impressed with what Andrew has put together in his weight room to be able to train a squad of 50 players in just under 2 hours. The method he uses is both ingenious in both its simplicity and application.

He has 4 self contained power areas (Hammer Strength), with these are an adjustable decline to 90 degrees bench and a Uesaka Olympic bar, plates and pulling blocks. As an aside, this is all you need to set up the ultimate home/garage training centre, enabling anyone to train fairly completely, but I digress. 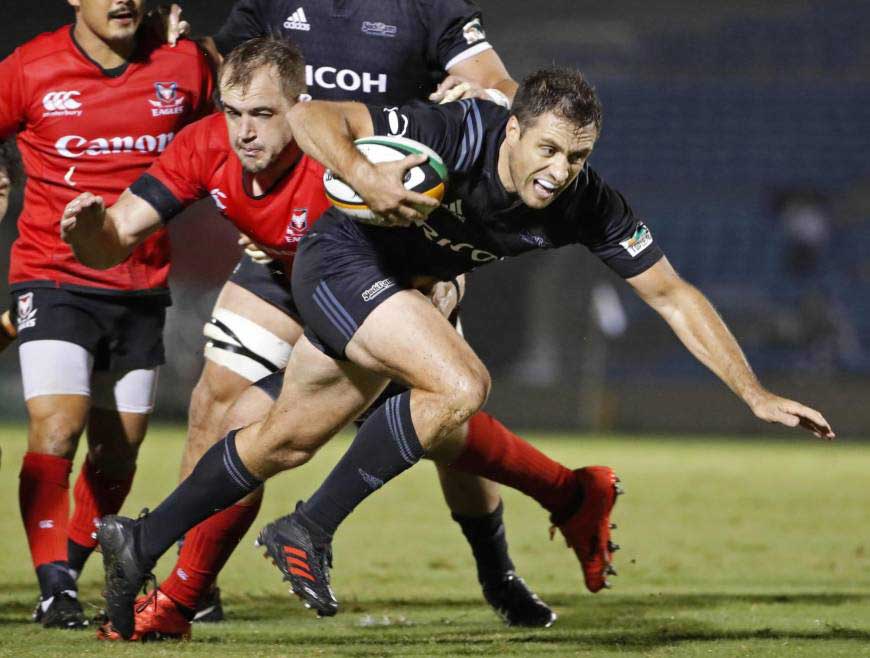 The Ricoh squad arrives in groups of 4 every 10 minutes, you could train 12 athletes simultaneously utilizing Andrew’s methods but would lose a little of the personal touch that he uses so well, other wise it may well be an assembly line approach to training. He uses a 3 week loading cycle and depending what his player requires this could be a strength, size or power focus. Utilizing a pull, push and squat exercise protocol, he can train his entire squad in around 2 hours; a basic power focused program would block snatches, band box squats and push press.

The exercise selection is based on training age and individual focus. With the addition of a box squat, chains, bands and weight releasers the number of exercise movement variations is endless and only limited by your imagination and experience.

The day I observed Andrew’s program, the players were in the third week of their cycle, this called for them to perform 4 sets of 3 reps then 4 sets of 1 rep, the triples were at 80% and higher and the singles followed on starting at 90%. Each player could complete each set without a spot but should struggle to complete the set, if not the weights are re-adjusted. The complete 3 week protocol uses 8 sets per exercise, so each player gets a large volume of training stimulation with intensities above 80% thus inducing both hypertrophy and strength.

The other key element of the program is that they cycle the time over the 3 week period using an electronic timer. Initially starting at a set every 60 seconds in week 1, then to a set every 75 seconds in week 2 and finally when the loads are heaviest a set every 90 seconds in week 3. The players loading assignments are personalized based on previous cycles 1 RM and in the exercise progression on each training day they start from in side the rack and work out i.e. incline/chin inside, then squat outside and finally snatch on platform.

These methods have formed a very productive system that works well in squad training with players of varying ability and training age in Andrew’s own words, “I found the workouts to be more productive as there is urgency required by the players to load the bar prior to the next buzzer and they are actually completing all the prescribed exercises and sets within the hour where as before when left to themselves to time the rest period the workouts would drag on and many failed to finish the program. Also the players are a lot more focused as there is less time available to be distracted.”

Well Andrew good luck to you and your Ricoh team in the upcoming Japan Top League competition, and thanks for providing us with an insight into your training systems, cheers, Ash